On January 25, Governor Romney released his proposed budget for FY 2007. The budget would rollback recent funding increases and improvements to the Massachusetts Rental Voucher Program (MRVP) and Residential Assistance to Families in Transition (RAFT); however, the Department of Housing and Community Development's (DHCD) budget would increase by $5.3 million to $97.1 million.

The public housing operating subsidy account, one of CHAPA's top priorities, would increase by $9 million from the current $34.8 million (not including the pending supplemental budget). Most other DHCD programs are level-funded. The budget also includes two new programs: $500,000 for individual development accounts, and $1 million for a tenancy preservation program for people with disabilities where the disability "is directly related to the reason for the eviction."

The governor proposed reductions for two key programs. First, his budget cuts $2 million from the MRVP. This money, provided by the legislature last year, was used to stabilize rent levels and to allow vouchers to be reissued and frozen vouchers to be issued to households on waiting lists. Romney's budget would eliminate the requirement that vouchers be reissued, and it would eliminate the provision that tenants pay no more than 40% of their income toward rent. The governor also, once again, proposed instituting time limits and work requirements on MRVP residents (items defeated by the legislature when proposed in the budget last year) without any data to show the necessity of doing so.

Second, the proposed budget would cut $2 million from RAFT, a homelessness prevention program. In FY 06, the legislature funded RAFT at $5 million. Since its inception in 2004, RAFT has helped more than 3,000 families stabilize their living situations. In FY 05 and FY 06, state allocated funds were exhausted before the end of the fiscal year. CHAPA, the Massachusetts Nonprofit Housing Association, and the Building Blocks Coalition are seeking level funding at $5 million for RAFT, viewing it as one part of a comprehensive approach to providing housing for residents of the Commonwealth.

Romney also included two outside sections that relate to housing and DHCD.

New Building: Outside section 81 contains a new "Housing Creation Program." This program allocates $30 million which could be claimed by a "city or town [that] has demonstrated an increase in dwelling units of at least 1% over the number of housing units in place January 1, 2006." There are no affordability requirements. Among other things, new dorm rooms could be counted toward the 1% increase. The funds would be distributed using the state lottery formula. Payments would range from a low of $112 for the town of Aquinnah to a high of $1,899,148 for the city of Boston. The $30 million dedicated to this program could fully fund all of the DHCD budget increases being sought by CHAPA and the Building Block Coalition.

State Surplus Land: Outside section 78 creates a new expedited process for disposing of state surplus land. The commissioner of the Division of Capital Asset Management and Maintenance (DCAM) would be responsible for disposing of state surplus land, with advice from a surplus land coordination committee consisting of representatives from: the Executive Office of Environmental Affairs, DHCD, the Executive Office of Administration and Finance, DCAM, MassDevelopment, Massachusetts Municipal Association, and Massachusetts Association of Regional Planning Agencies. The committee could request an economic development suitability analysis and a smart growth review (the smart growth review would be mandatory for parcels larger than 2 acres, and for parcels larger than 25 acres, DCAM would have to wait one year from the filing of the review b efore disposing of the parcel). The city or town where the property is located would receive notice that the property was to be declared surplus, and a public hearing would be held for parcels larger than 2 acres (or at the commissioner's discretion). The city or town would have a right of first refusal to purchase the property at 85% of its value, and that right could be assigned to a nonprofit. Time would also be given to hold a Prop 2 1/2 override vote if necessary. The statute's authority would end on June 30, 2010. The city or town would receive 10% of the net sale proceeds if it did not exercise its right of first refusal, and could receive up to 25% if it takes "affirmative actions to further the Commonwealth's objectives for the parcel." Then, $5 million would go to the General Fund. Afterwards, from the next $20 million, one-half would be credited to the General Fund and one-half to the Smart Growth Housing Trust F und. Of any remaining funds, 20% to the Smart Growth Trust and 80% to the Capital Projects and Maintenance Fund.

CHAPA will continue to meet with legislators to make them aware of our FY 2007 budget priorities. The priorities can be found on our web site at www.chapa.org. 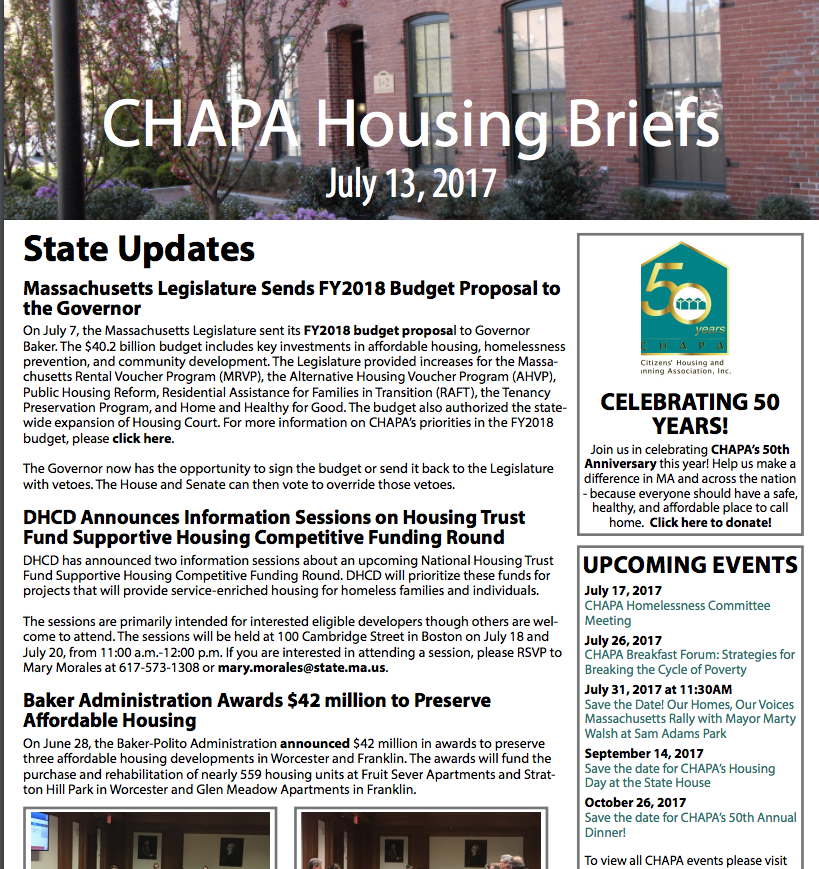